Essay by Roy Scranton and conversation with philosopher Timothy Morton examining Houston as a hyperobject and potential site for a future fossil fuel catastrophe.

Note that this essay is speculative and was published months prior to the arrival of Hurricane Harvey, which is now tied for costliest tropical cyclone on record. 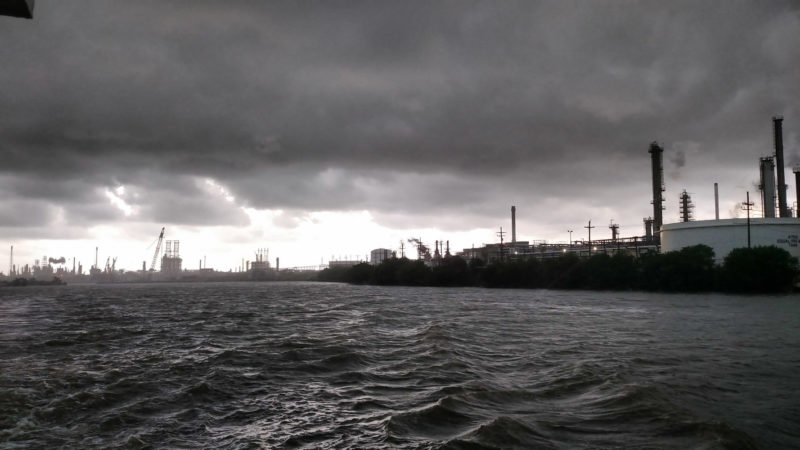 Isaiah whirls through the sky, gathering strength from the Gulf of Mexico’s warm waters. City, state, and federal officials do the sensible thing, evacuating beach towns and warning citizens and companies in Texas’s petro-industrial enclaves from Bayou Vista to Morgan’s Point to prepare for the worst.

The massive cyclone slows and intensifies as it nears the barrier islands off the coast, with wind speeds reaching over 150 mph. By sunset, several hours before landfall, the storm’s counterclockwise arm is pushing water over the Galveston Seawall; by the time the eye finally crosses the beaches east of San Luis Pass, the historic city of Galveston has been flattened by a twenty-foot wave.

As Isaiah crosses into Galveston Bay, it only grows in strength, adding water to water, and when it hits the ExxonMobil Baytown refinery, some fifty miles inland, the storm surge is over twenty-five feet high. It crashes through refineries, chemical storage facilities, wharves and production plants all along the Houston Ship Channel, cleaving pipelines from their moorings, lifting and breaking storage tanks, and strewing toxic waste across east Houston.

The iridescent, gray-brown flood rises, carrying jet fuel, sour crude, and natural gas liquids into strip malls, schools, and offices. By the time Isaiah passes inland, leaving the ruined coast behind, more than two hundred petrochemical storage tanks have been wrecked, more than a hundred million gallons of gas, oil, and other chemicals have been spilled, total economic damages for the region are estimated at over a hundred billion dollars, and three thousand six hundred eighty-two people have been killed. By most measures, it is one of the worst disasters in US history: worse than the 1906 San Francisco Earthquake, worse than Hurricane Katrina, worse than the terrorist attacks of September 11.

The effects ripple across the globe. The Gulf Coast is home to roughly 30 percent of the United States’s proven oil reserves; The Gulf Coast and Texas hold 35 percent of its natural gas reserves. The refineries and plants circling Galveston Bay are responsible for roughly 25 percent of the United States’s petroleum refining, more than 44 percent of its ethylene production, 40 percent of its specialty chemical feed stock and more than half of its jet fuel. Houston is the second busiest port in the United States in terms of pure tonnage and one of the most important storage and shipping points in the country for natural gas liquids. Isaiah shuts all that down. Within days of the hurricane’s landfall, the NYSE and NASDAQ plummet as the price of oil skyrockets. Fuel shortages ground flights across the country, airline ticket prices soar, the price of beef and pork shoots up, and gas prices at the pump leaps to seven or eight dollars a gallon. The American economy slips into freefall.

Meanwhile, as the oil-poisoned water in east Houston flows back toward the sea, it leaves behind it the worst environmental catastrophe since the BP Deepwater Horizon spill. Rather than diffusing into open water, though, all the sludge is cradled within the protective arms of Galveston Bay.

The good news is that Isaiah hasn’t happened. It’s an imaginary calamity based on models and research.

Read the rest on Mustarinda