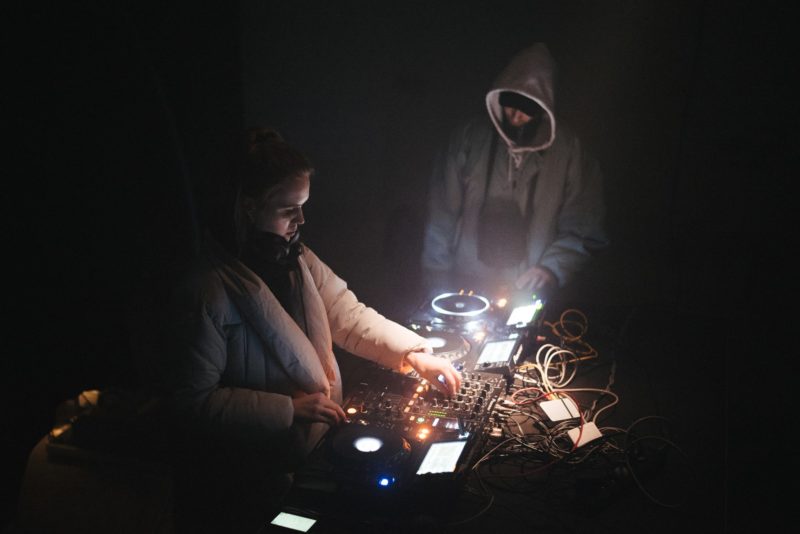 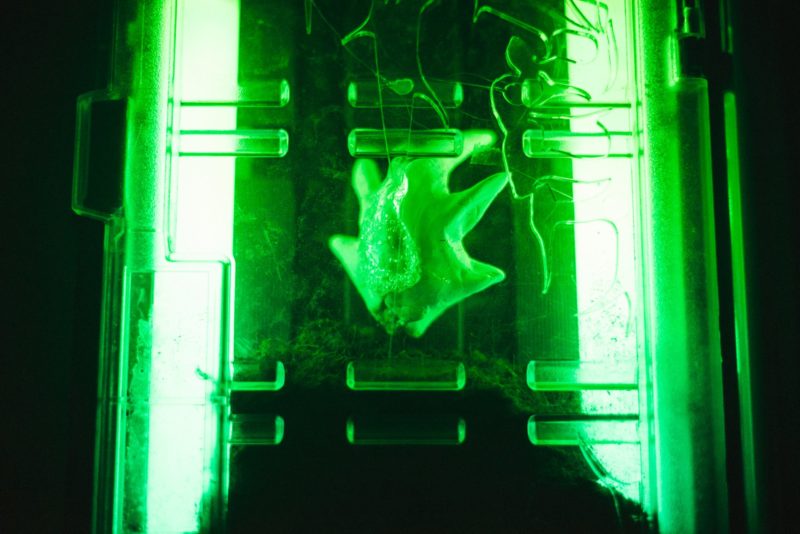 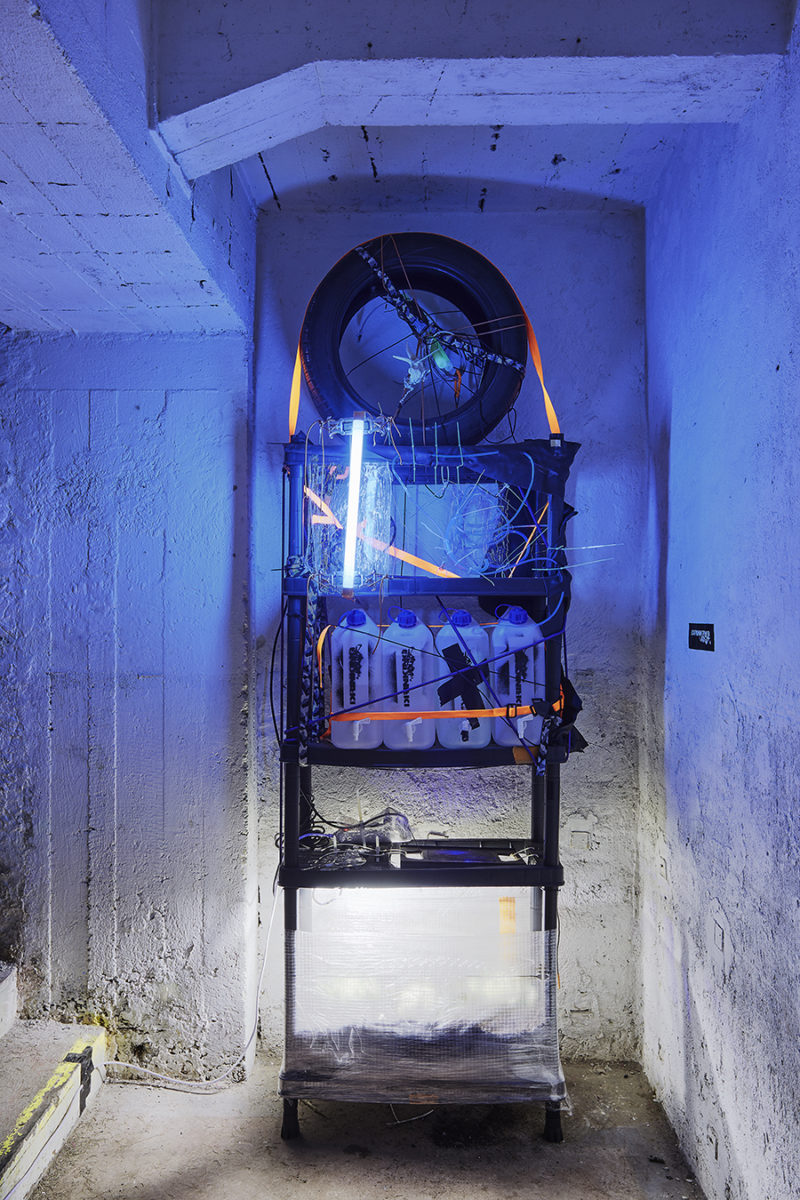 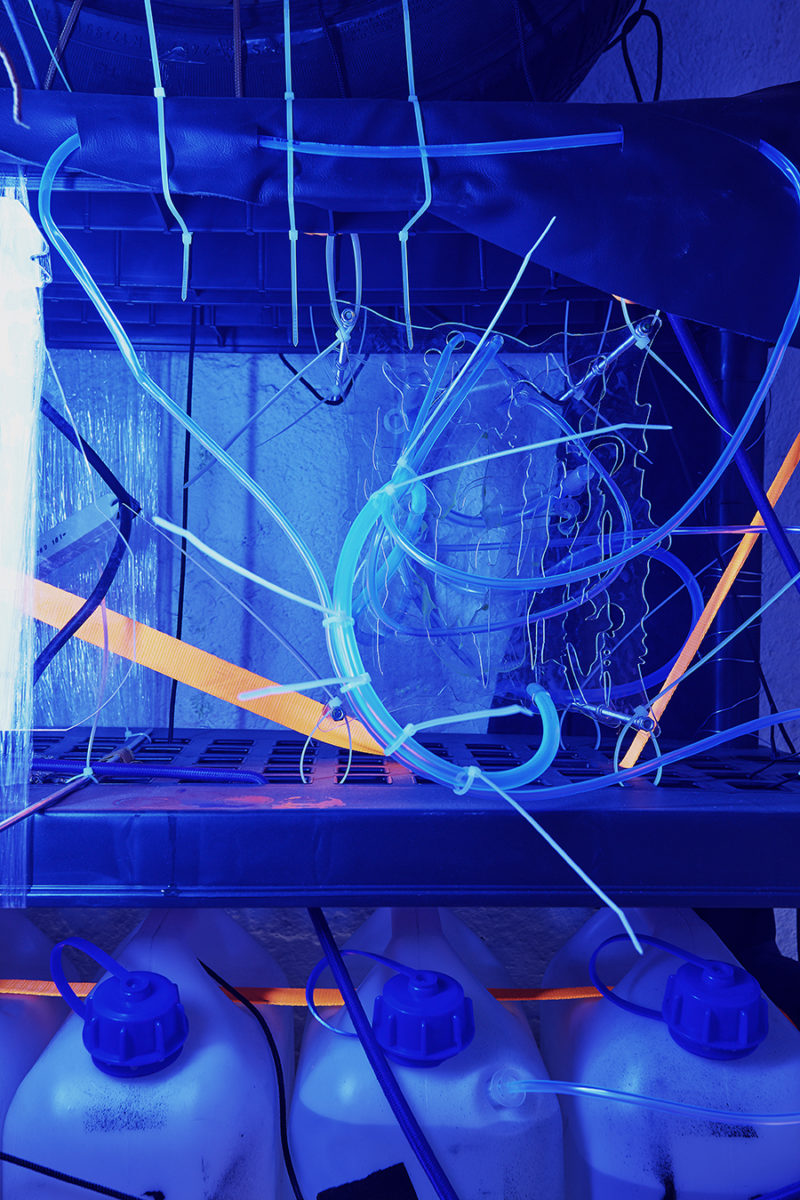 Performed at PAF Olomouc in collaboration with Olbram Pavlícek, aka 93echoesandsirens

This special event directed by the BCAA team is largely built around the artist and musician Olbram Pavlícek, aka 93echoesandsirens. The site-specific installation-environment is dominated by a giant leather gong which vibrates in obscure ciphers and functions as a bearer and amplifier of information, and as a totem for the tribes of one of the future Chthulucenes. The community looks to him as a symbol of the unending continuity and belief in one’s own ability and survival. But it’s hard to tell if it’s not more like the Monolith rather than something from Stargate …

The BCAAs have designed the space to resemble a civil defence bunker, and it is embedded in an unspecified post-apocalyptic future where fragments of current technologies and materials are present in abundance. However, they are only fragments of the past, kept in operation through partial knowledge of their original technology. Objects often play the role of multifunctional modules because they have a major task in preserving life in an isolated bunker environment. Society does not consider technology to be an obvious component of its life, but more as something that maintains itself in the interests of our survival. In their aesthetic, the original design is blended with tribal-religious elements. Fragments of a cult appear throughout the environment in various forms and media.

BCAA: “It could be said that this is a world not very different from the one in which we currently live – technologies are idols and a necessity for survival (or at least for the preservation of our current status), even today. Here however, they have suddenly lost their original context and become more like a magical fetish of unknown or unclear ‘power’. Yet this is not the first criticism of the current evolutionary stage of society, but rather one of the most natural scenarios for us: a world where even in the ruins of some future disaster it will still be possible to dance. We also consider this project to be a search for ways to link our musical and artistic activities (which we have been doing for a long time within the BCAA project), but here we are moving for the first time into the AFK * world, which allows us to explore the possibilities of exhibiting outside the gallery context – in a party setting – and vice versa: the possibilities of musical production outside the classical party environment.”

BCAA system is an online audiovisual platform for music, visuals, talks and artist projects connected with new technologies and contemporary world. Based in Prague but reaching beyond whatever frontiers can be found, we want to be part of a worldwide soul by both the content and the audience. We connect musicians with visual artists in streams with our own virtual environment – we upload podcasts – we organise talks – we run a hybrid gallery between our studio and the internet (non)space – we make music and art projects as a collective. Things we do are not separated entities, they can combine, overlap and merge together into whatever new way of expression imagined.