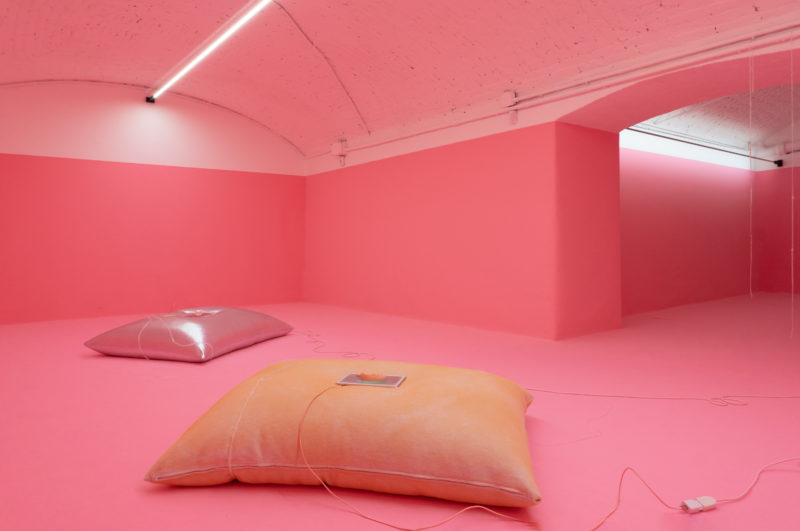 The Mating Season of Frenzy Breeze

Affection in social relationships and in biological processes of conservation and development of organisms may show common features. The boost that leads man to relate to others by creating interpersonal relationships is the same energy that makes every living being an open and non-isolated system, driven by a continuous exchange with the environment. The perception of individuality is shaped by the relationship with the outside that constantly redefines the boundaries, in a flow of chemical processes and mental projections.

We have witnessed major changes in the means of communication with the deve­lopment of digital technology, which on the one hand break free from the physical presence and on the other recall their presence emphasizing the emotional dimen­sion. The possibility to gain emotional fulfillment with fictitious means causes new neuroses and addictions, leading many people to a progressive isolation in a micro­cosm without real interlocutors, where even the perception of oneself and one’s own corporeity is threatened by the lack of exchange with the outside world.

The emotional solitude – an ever more current existential condition – is told by Gioia Di Girolamo through a fictional character, called Frenzy Breeze, who becomes a metaphor for a contemporaneity in which the physical dimension is replaced by ima­ges and narrations that are easily available online, surrogates that provide sensory fulfillment to take the place of the real experience. The environment of Frenzy Breeze is closed as a biosphere that is self-nourished with no contact with the outside, in a continuous circle of satisfaction of artificially fed desires. Interested in the current transformations in the ways of perceiving the body and the affections, in a world increasingly characterized by the pervasiveness of technology and digital communi­cation, Gioia Di Girolamo analyzes with sarcasm and a critical eye the phenomena of internet addiction associated with the spread of social media and contents providing sensory experiences through virtual stimuli. The need to communicate with other people, to create emotional relationships and to increase self-esteem, during the excessive use of virtual instruments can take on grotesque and paradoxical featu­res, disclosing unease behind the sweeter and cozier appearance. Gioia Di Girolamo reworks the ambiguities of the imaginary web oriented to the satisfaction of desire, from online dating chats to ASMR (autonomous sensory meridian response) videos that provide pleasure and relax through particular sound stimuli, showing the critical aspects to tell the present in its contradictions.

Gioia Di Girolamo, with an experimental attitude in the use of materials, combines various media in her installations, including video, sculpture and painting, activating sensory experiences that refer to an impalpable physicalness, capable of stimulating a tactile as well as evanescent sensitivity. Thus, an elusive reality is generated, where the unity of body and individual dissolves generating different weightless identities.

The Mating Season of Frenzy Breeze is an exhibition that combines works made with various materials, such as modeled and glazed clay, sweatshirts, printed fabri­cs, painting, pigments, vinyl glue, silicone, detergents and softeners. They form a narrative path, a microcosm of shapes in which the biological dimension, both of the elementary cell and microorganism and of the complex dimension of the human body, becomes ethereal and dominated by pastel shades.

The limits of transcendence pushed to excess by the use of technology and the role of the body in this process, between permanence and abandonment, are explored by Gioia Di Girolamo as fundamental elements for the understanding of a contempora­neity in which technology transforms man hybridizing the opposites in posthuman entities. The body-digital dichotomy goes along each work, showing at the same time references to physicality and immateriality.

Anticipated by a prologue set in the renovation site of the gallery, where Frenzy Breeze has been presented as an empty and dismantled body, with the epidermis

separated from the body as the molt of a reptile, the narration continues in the renovated exhibition space, transformed by Gioia Di Girolamo in a metaphorical garden, a place where Frenzy Breeze gets ready for the season of love by changing the skin, starting a spring of senses, her own flowering. A pink kimono, printed with the words “do you want chat?”, repeated over the entire surface like an endless chat with no answer, expresses the obses­sive nature of the affective research on the web.

Decorated by a train painted with shades inspired by the shape of the cells, the kimono is surrounded by various sculptural elements that recall fertility. Plant and floral shapes such as garlands, branches, water lilies and leaves are grouped into islands that are both natural and synthetic. Among them a serpentine virus creeps, decomposed into multiple silvery bacteria made with reflective padded fabric, which represent the digital dimension that emerges from the screen taking on primary biological forms in the narration of the exhibition. The cold brightness of the technological devices, the screens of smartphones and computers in particular, is transformed into a soft bodily presence, with a sexual significance, which brings together a biological and digital fecundation, to satisfy the de­sire for transcendence and immortality. Taking forms that recall mercury drops, the silver virus shatters to fertilize the garden, thus joining Frenzy Breeze’s corporeity to generate a hybrid dimension, where the body is transcended in digital immortality.

The bacteria also appear in paintings created by Gioia Di Girolamo in pastel colors, in which simple single-cell organisms are portrayed in their essential vitality.

The skin and the head, interstitial spaces between individuality and the external environ­ment, appear in different works. The color of the skin resonates in the installation, expres­sing a corporeity that becomes a weightless membrane, a virtual identity that can be changed like a dress. The tactile dimension, deprived of physical concreteness, assumes a spiritual value, where reality is transcended in favor of a magical world. The sweatshirt, a particularly soft and permeable fabric, takes on an even more tactile value thanks to the padding, highlighted by the pink shades reminding the skin color. The wall-mounted works made by Gioia Di Girolamo with padded and spray-painted sweatshirt appear as an evo­lution of traditional painting, transformed into a synesthesia involving all the senses as a living being. Part of the body and at the same time mind instrument, the heads are shaped by Gioia Di Girolamo with essential features that make them similar to ancestral depictions of idols, alien figures with a sweet and dreamy expression with a third eye placed in the forehead that shows the face even if seen upside down. The physical perception and the dimension of the spirit mingle and together form the complexity of a reality without certain coordinates and without gravity, where everything is arranged in an evanescent space like the digital world.

On the walls some masks offer a variant to the spherical heads, emphasizing the ritual aspect in this case, bringing Frenzy Breeze’s spring back to an atavistic dimension.

The audio of the video in the exhibition echoes in the space, repeated in multiple screens, in which the emptiness of the desert is marked by the sound of chat notifications repeating non-stop, representing the expectation, the desire, the search for gratification. In the video a dialogue without interlocutor is set, so that the condition of solitude returns.

The fusion between man and technology staged in the garden generates two twin embryos that rest in the gallery underground floor, transformed into an enveloping environment like a uterus during gestation. Two large cushions underline the bodily-immaterial polarization that characterizes the entire project: one is padded in skin-pink tones and the other in silver, soft but reflective like a screen. Above the cushions, tablets with videos showing cell formation stages, made by filming the dropping of varnish in the softener, on which small sculptures of sleeping figures are placed.

Generated by the fusion with technology, the humanity of the future confirms the dual nature of the human being, both bodily and spiritual. Despite the immateriality of pixels and web communication, man still shows himself in his fragility made up of emotional needs that connect him to the world of living organisms, of which technology becomes an integral part, between instinctive impulses and sublimation. 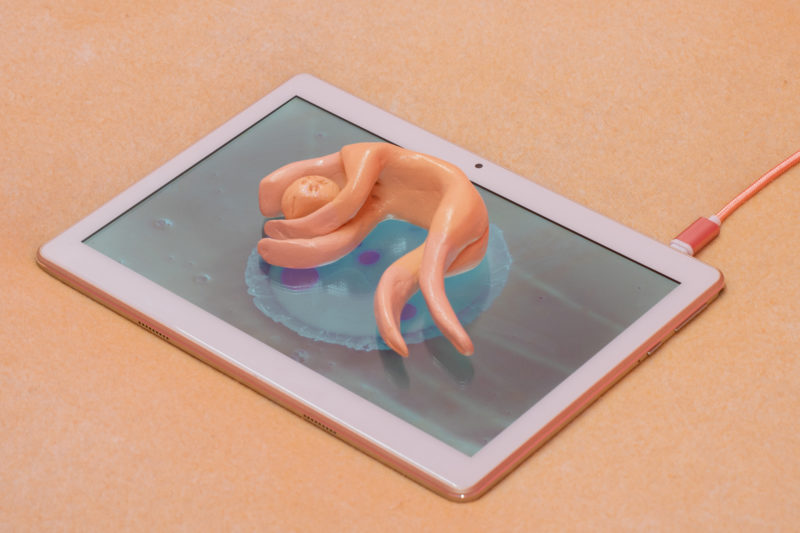 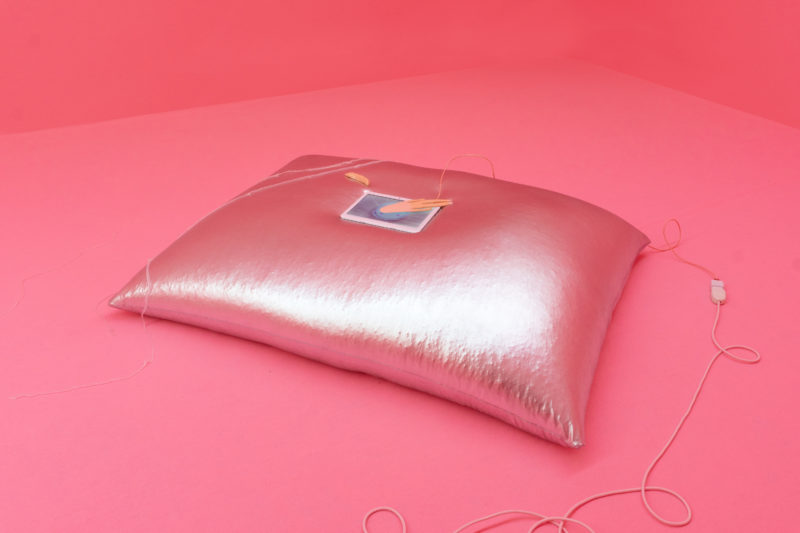 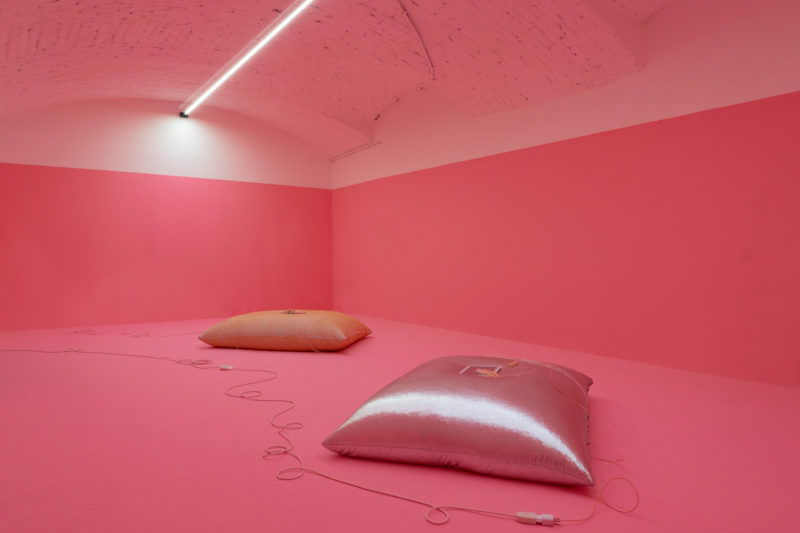 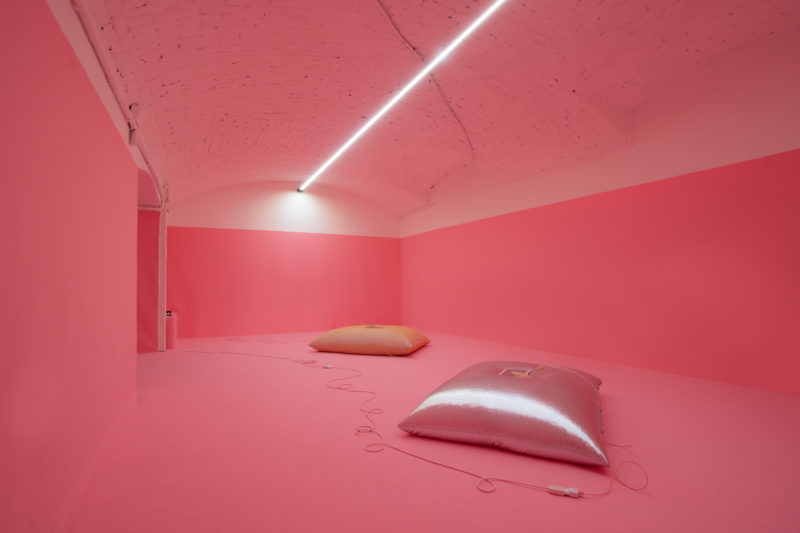 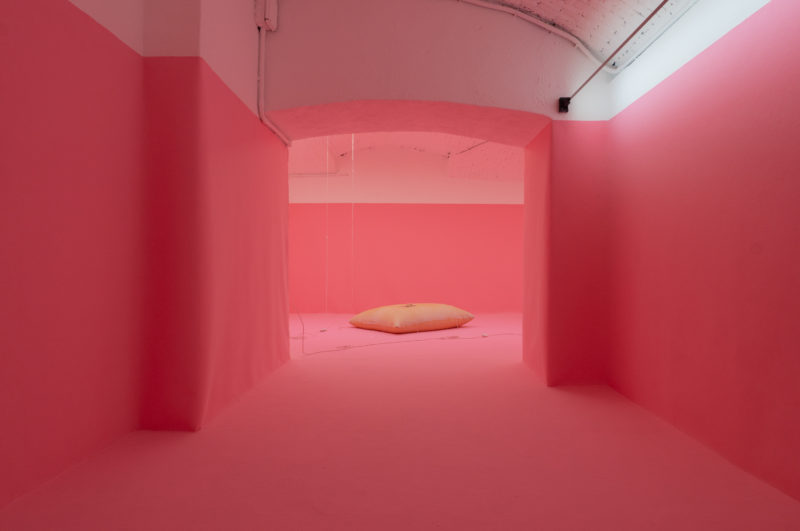 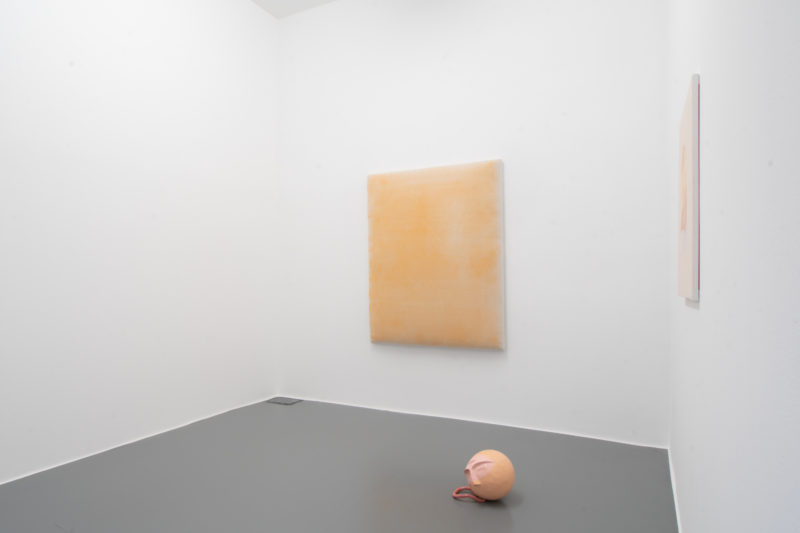 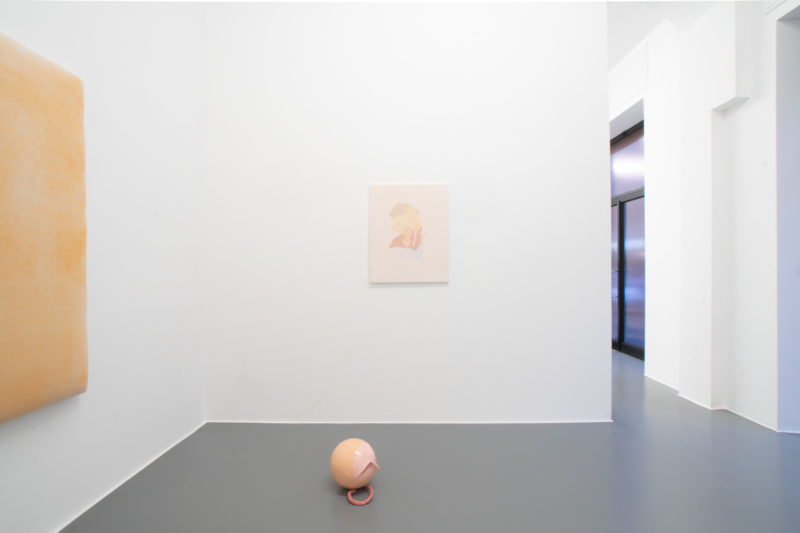 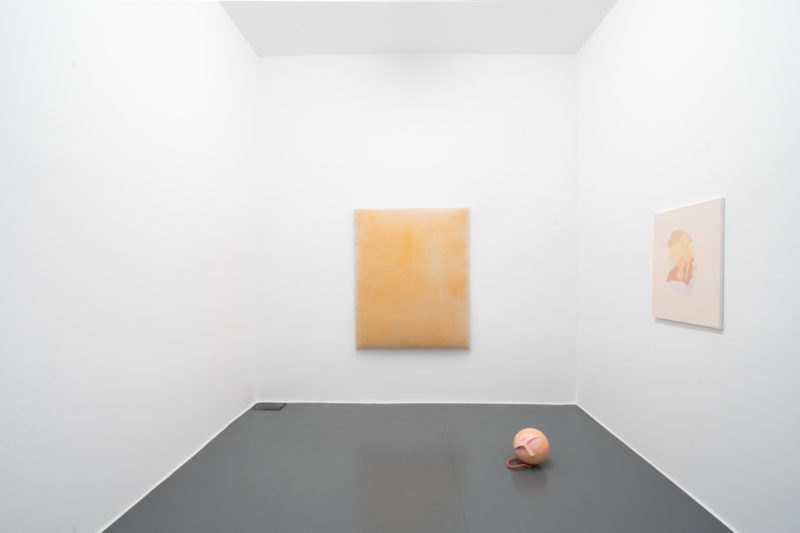 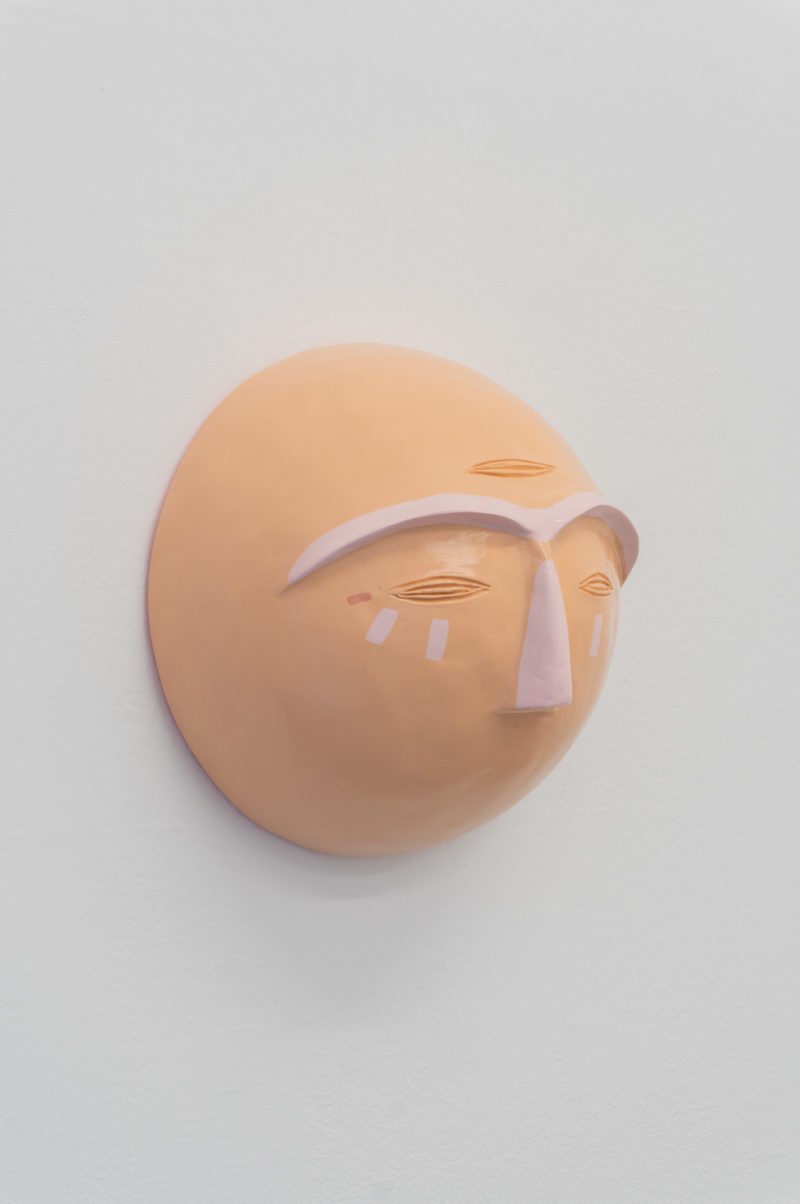 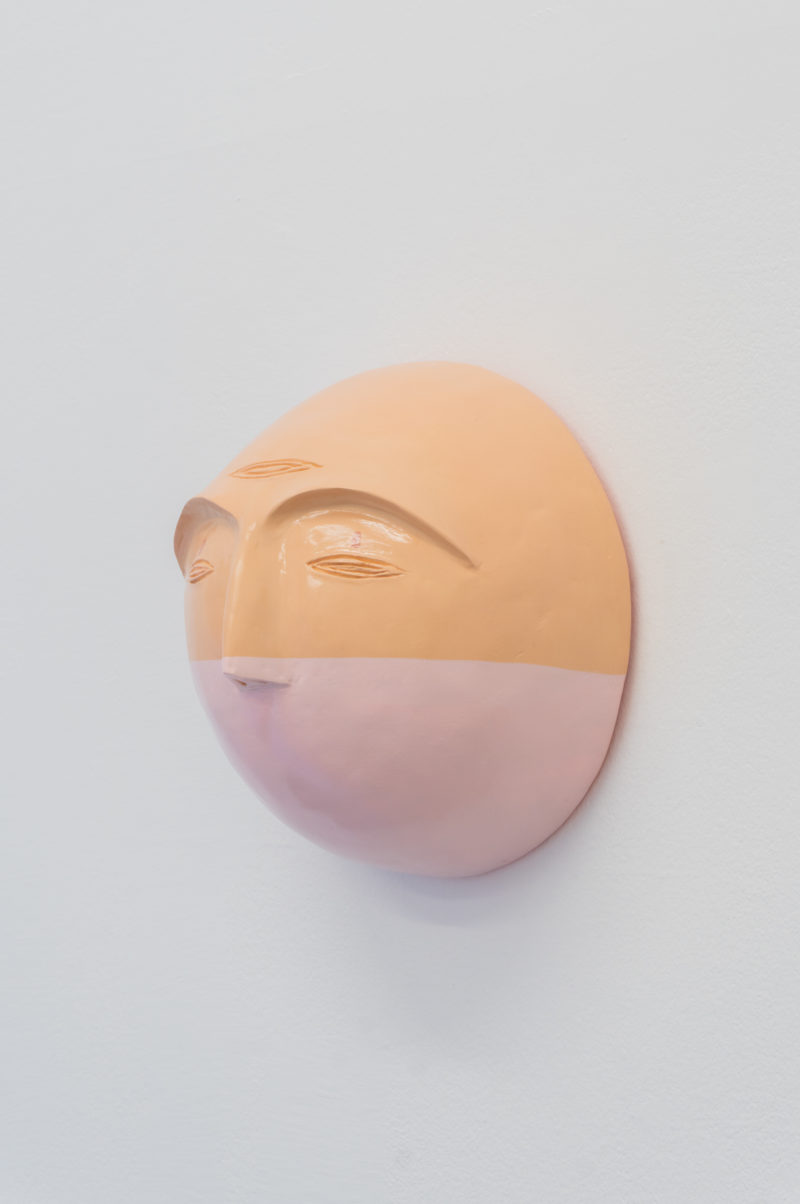 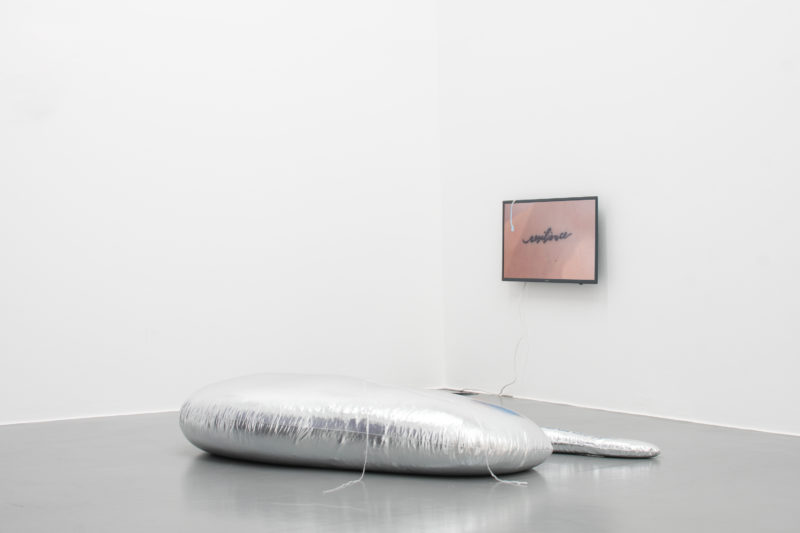 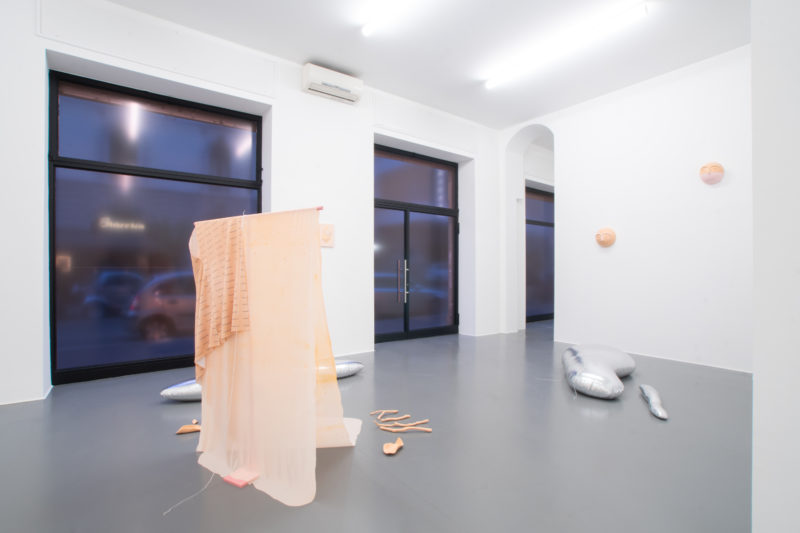 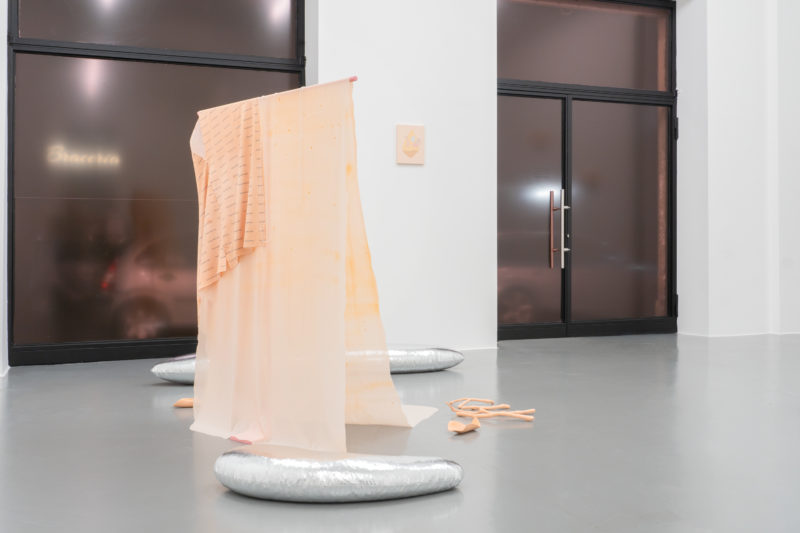 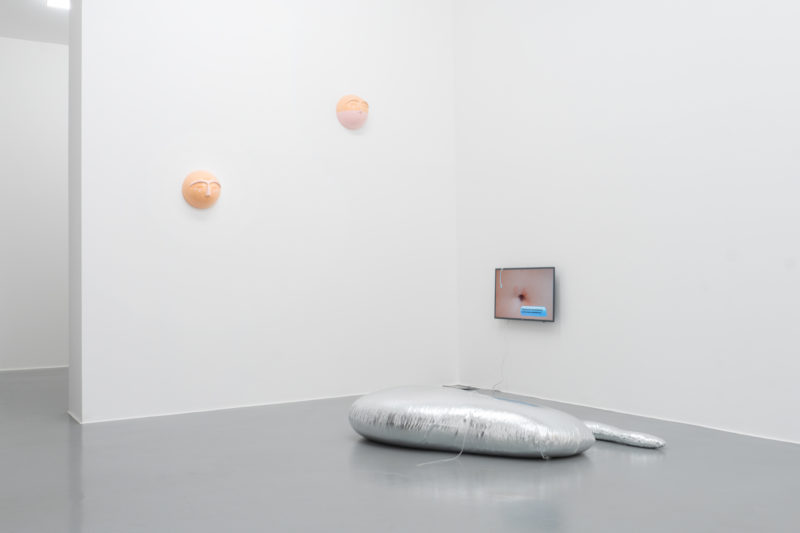 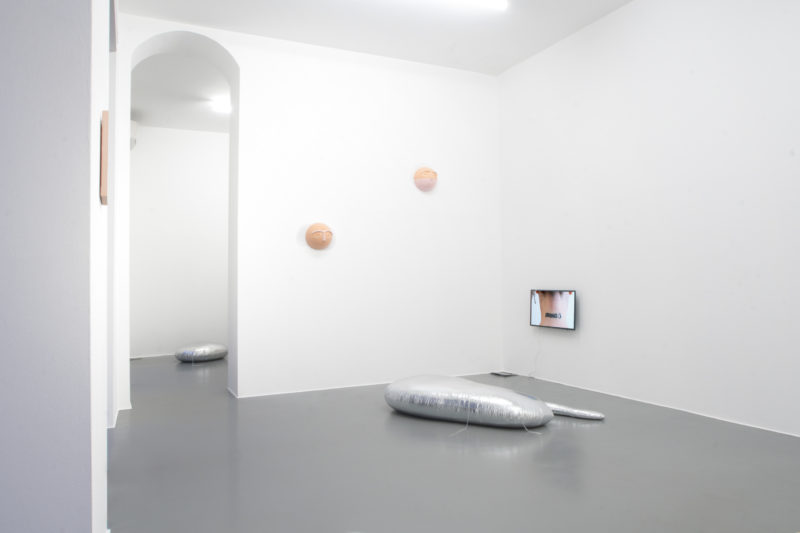 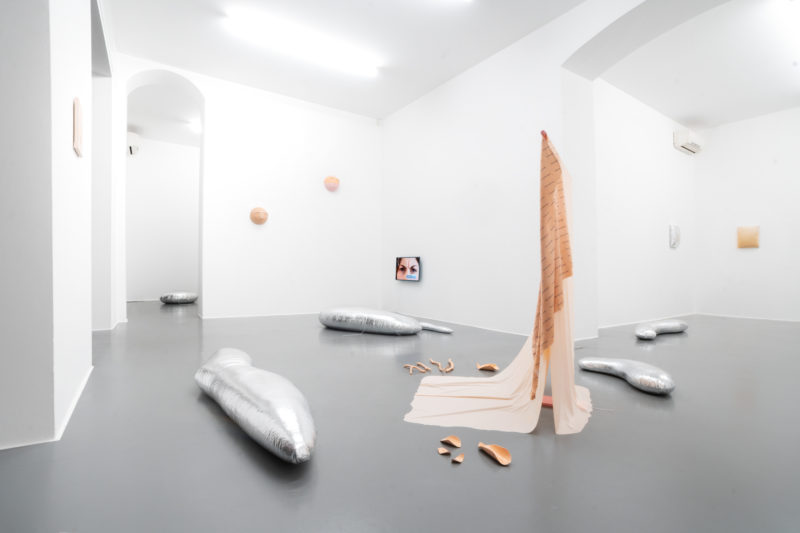 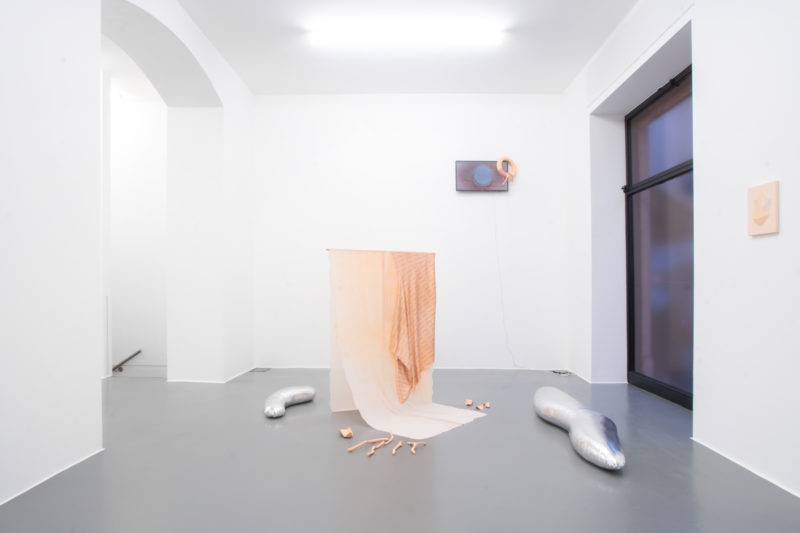